Not too much anyway.

People who frequently use antibacterial mouthwash have increased risk of diabetes according to a >>> study. One of the reasons may be a reduced level of bacteria that use a particular substance found in food for their survival.

Nitric oxide has different functions in the body, some of them of pivotal importance, such as influencing blood pressure and which muscles receive the most amount of blood when oxygen demands differ between tissues.

From the gut back to the mouth

Nitrate is found in high amounts in foods such as beetroot and gets into the bloodstream when such foods are absorbed from the gut. After that, some of the nitrate has an interesting and perhaps surprising fate. It is actively secreted as part of saliva, and in the mouth a substantial portion is transformed to nitrite. This nitrite in turn is absorbed in the intestine.

Daily use of mouthwash increases risk of diabetes

In the mentioned study, overweight/obese participants were followed up for 3 years, and their risk of getting a diagnosis of prediabetes/diabetes was tracked. The ones that used mouthwash two or more times per day had about a 50 percent increase in risk of pre-diabetes/diabetes compared to those who were less frequent users or who did not use mouthwash. The associations found held up also after adjusting for possible confounding factors. Perhaps most importantly, no confounding were seen with other oral hygiene practices, or oral diseases and conditions. Still, further studies are needed to make firmer conclusions on what role mouthwash plays in diabetes development, and to give more targeted advice on when to use mouthwash and when not to use it.

The authors mention possible mechanisms that can explain the findings. They note that nitrate ingestion led to short-term improvement in glucose tolerance in a previous >>> study, and that the use of mouthwash abolished these effects. Further, nitrate supplementation prevented development of metabolic syndrome in genetically modified mice, in another >>> study. These effects may have to do with nitric oxide’s role in glucose-insulin dynamics, regulation of microvascular blood flow, mitochondrial function, gluconeogenesis, and the production of anti-inflammatory substances. 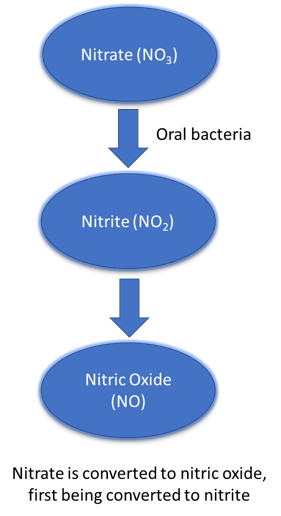 Beetroot is among the foods with the highest content of nitrate. Salad, fruits and vegetables in general are also good sources, although amounts can differ widely (>>> study).

Beetroot has been brought to fame in the sports world recently (>>> article) due to its performance related effects on athletes in endurance sports, having been investigated in a large amount of studies over the last ten years. This has helped develop several commercial products with high amounts of nitrate, by way of added nitrate or concentrated beetroot juice. These products may also be a choice for those looking to prevent diabetes but who are not keen on ingesting the amount needed through nitrate rich foods.

However, there are indications that only one glass of regular beetroot juice per day can lower blood pressure (>>> study). A high blood pressure is generally a concern for those at risk for diabetes, and points to the benefits of beetroot in this group. Whether beetroot and other nitrate rich foods can actually help prevent diabetes, and what amounts that are needed, is yet to be investigated more thoroughly.

Inge Lindseth is a registered dietitian from the University of Oslo with over 20 years experience in nutrition. His special areas are diabetes, obesity, ME and those who want to get more out of exercise and perform the maximum in sports.

By clicking "Accept all", you agree to cookies being stored on your local device. This improves navigation on the site, video content can be displayed and we can anonymously analyse whether the pages are being used as intended. All approvals are made in accordance with the provisions of the GDPR.

Hit enter to search or ESC to close

Menu
You are using an outdated browser. The website may not be displayed correctly. Close